The maintenance squadron consists of four flights: Flight Inspection, Flight Intervention, Flight Engines, Flight Support. Each flight has his own storage and specific task and contributes directly or non-directly to realize the F-16 flight plan.

Flight Inspection
Every 300 flight hours (or about after every year and four months) a detailed maintenance is planned for each F-16.
The Flight Inspection is subdivided into two main areas; the Docks and the Backshops. Both are controlled by the technical management:

The main objective is to ensure maximum serviceability of the fleet. The three subdivisions; Airframe, Elec and Engine, are responsible for preventive maintenance (inspections and/or small maintenance) and corrective maintenance (repairs or interventions).

Besides the main objective, the Flight Intervention is also involved in modifications or supporting other sections in performing modifications. The de-composing and composing of all kinds of compartments followed by thorough inspections is often five times the work as the modification itself.

The Repair Chief is the one delegating and assigning specialists in teams of two to several locations (flightline/shelter) in order to loose minimal time to make the aircraft serviceable as quick as possible again..

Flight Engines
Every 200 flight hours, the F-16 engine needs to be removed and has to undergo a “phase-inspection”. This inspection, as well as other engine inspections, are the responsibility of the Flight Engines.

To fulfill this task, the Flight Engines is subdivided into several specialisms:

The Flight Support is subdivided into three specialized branches: 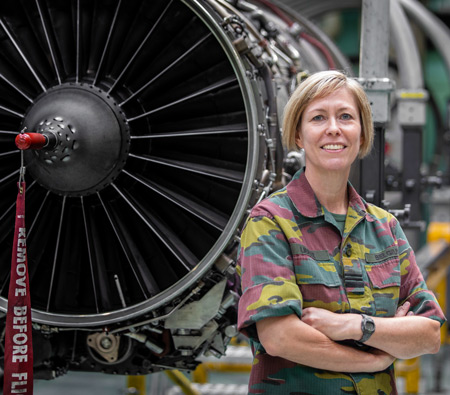