31 Tiger Squadron has always been considered as one of the top squadrons of the Belgian Air Force. Besides that, 31 Squadron is proud to be one of the cornerstones of the NATO Tiger Community. The Squadron has been a full member of the NTA since 1962.

The Squadron was founded at Chièvres Airbase in 1951 flying the renowned legend of World War Two, the Spitfire Mk XIV. The squadron flew 151 missions with this venerable fighter. The last flight on this aircraft took place on 7 July 1952. From this date, there were no more aircraft assigned to the squadron and the pilots were assigned to their rivals – 23 & 27 Squadrons.

On September 1, 1953, 31 Squadron initially reformed as “Instrument Flight” on the Lockheed T-33. Only a couple of weeks later, the first F-84G Thunderjet for the Squadron arrived. It flew for the first time on October 29, 1953. By the end of 1955 the T-33 was taken out of service. During this period, 31 Squadron was relocated several times, while their future airbase was being completely refurbished. Kleine-Brogel had been a forward Canadian Spitfire airfield in early 1945. The PSP-airfield was now being turned into a modern jet airbase, complete with concrete runways, taxi tracks and aprons. Finally, on February 1, 1955, 31 Squadron was moved to Kleine-Brogel, where they are still based today.

The Belgian Tigers switched to the F-84F Thunderstreak in 1956. On this aircraft, the pilots flew a total of 37.000 hours. They were also assigned to NATO’s Ace Mobile Force (AMF). On July 19 1961, 31 Squadron took part in a “Tiger Meet” for the first time. The Tiger Meet took place at RAF Woodbridge (GB).

In March 1964 the Squadron converted to the F-104G, and like many other Starfighter units, they were assigned to NATO’s fighter bomber strike role and were ready to go in harm’s way should circumstances dictate. The last operational flight on the F-104 took place in March 1983. It was the “oldest” 31 Tiger pilot François Aerts who flew The Last Starfighter (FX-99) to a storage depot at Koksijde Airbase on September 26, 1983. By this time the Belgian Air Force was fully operational on the F-16 Fighting Falcon..

Not a lot later an era of training for secret Cold War-missions started, interspersed with period where flying hours were seriously cut due to budgetary constraints. But the Tigers of 31 Squadron continued to excel in their task. For example, the Squadron won the coveted 10th Wing Crossbow Trophy, which honored the best individual air-to-ground pilot as well as the best overall squadron result in air-to-ground range scores, for fourteen years in a row.

The Tigers of 31 found time to organize two unforgettable NATO Tiger Meets, in 1985 and 1993. The latter one was probably a very important one, as 31 Squadron picked up its responsibility to organize a Meet in a time where financial and political issues caused a severe waning in the motivation to organize a Tiger Meet. It is very well possible that the NTA had died a silent death if 31 Squadron had not organized a Meet in 1993. Besides, they organized it in less than 4 months’ time… and it was a short but excellent one!

Everything changed however, when in 1996 a third squadron joined the Tigers and Devils at Kleine-Brogel Airbase. With the reorganization of the Belgian Air Force, 349 Squadron was transferred to Kleine-Brogel, just like the F-16 Operational Conversion Unit. This changed the atmosphere and mentality of the airbase forever. In addition, at about the same time, the Belgian Air Force became involved in the first operational and armed missions since the Congo crisis in 1960. As from this moment, the F-16s of Kleine-Brogel would become involved in “real” operations almost continuously, which affected the pace and mindset at the airbase forever.

As of November 1996, 31 Tiger Squadron took part in operation “Joint Falcon” on a regular basis, flying over Bosnia-Herzegovina out of Villafranca Air Base (Italy). While the tension rose to a climax in Serbia and the Kosovo region in October 1998, the squadron and the rest of the Dutch-Belgian Deployable Air Task Force (DATF) was forced to relocate to Amendola Airbase in southern Italy. From that location, they participated non-stop in operation “Allied Force” as of January 1999. When the NATO Air Campaign against the Federal Republic of Yugoslavia started on 24 of March 1999, 31 Squadron flew numerous offensive and defensive combat missions. Missions included Combat Air Patrols as well as offensive attacks with unguided and guided bombs such as GBU-12 and AGM-65G. At the highlight of this conflict (April-May 1999), DATF had no less than 30 F-16s stationed at Amendola. It was the third largest NATO air force that participated in the air war over Serbia and Kosovo (after the USAF and RAF).

In June 2001, in between deployments to Amendola, 31 Squadron hosted another great NATO Tiger Meet at Kleine-Brogel. Although many member squadrons were involved in all kinds of real operations, the attendance was still impressive and a good time was had by all.

In September 2001, 31 Tiger Squadron was one of the last Belgian Air Force squadrons to upgrade to the excellent Mid-Life Update F-16’s and consequently it became a Multi-Role squadron while continuing their strike role as well. In 2002 the squadron grew in strength when their life long adversaries of 23 Squadron ‘Devils’ were merged with 31 Squadron after their beloved squadron was disbanded. A first immediate result of this was that 31 Squadron now had their “own” fully qualified MLU-instructors to convert them onto the new F-16, as the 23 Squadron pilots had been amongst the first ones to convert onto the MLU during the years before.

In 2004, 31 Squadron flew some of the first of NATO’s Baltic Air Policing missions, deploying to Zokniai AB (Siauliai AB) in Lithuania. Lithuania had become a new NATO member but did not yet have its own air force. Therefore, several NATO countries came to the rescue to watch the skies of the new NATO members and provided assets, with Belgium being the first NATO country to send aircraft for Quick Reaction Alert duties.

In 2007, 31 Squadron returned to Afghanistan. This time all aircraft were deployed to Kandahar Airbase in the hot and challenging southern desert. By now equipped with high-tech sensors such as the Sniper Advanced Targeting Pod, Joint Helmet Mounted Cueing System, and loaded with GBU-38 JDAM and GBU-12 laser guided bombs, the Tigers provided outstanding Close Air Support to all nations fighting the Taliban insurgents and assisted the Afghan people striving for a better life. This mission continued until the end of 2014.

Whilst withdrawing from the Afghan theater, a new mission for the tigers of 31 squadrons was on the horizon. As from October 2014, 31 Squadron flew missions in support of Operation Inherent Resolve. Initially these missions were solely executed over Iraq. Later on the mission broadened to Syria as well. The last missions for ODF were flown in December 2017.

A NATO Tiger Association member since the second Tiger Meet in 1962, 31 Sq has been host for 7 Meets and has won the prestigious Silver Tiger Award 10 times, an all-time record. This unique solid silver trophy is awarded to the squadron demonstrating the highest operational level, the most excellent team performance, and, last but not least, the best TIGER SPIRIT.

31 "Tigers" Fighter Bomber Squadron is one of the five F-16 Squadrons of the Belgian Air Component. Flying the F-16 MLU Fighting Falcon, "three one" is a Multirole squadron able to perform a wide array of operational missions. For the squadron, operationality is the top priority. Other than that, the squadron is known for its traditions and the fact it's often still referred to as a Fighter Bomber squadron is a nice example of this. All the traditions can be traced back to the squadrons rich history, now spanning more than six decennia. In addition, as a Tiger squadron and one of the oldest members of the NATO Tiger Association, 31 squadron takes great pride in spreading the "Tiger Spirit" and honoring the traditions that come with it. With their fighting spirit “May the enemies blood be our wine” (“In Sanguine Vinum”) the 31 tigers will fulfill their job with pride and dignity in the 21st century. 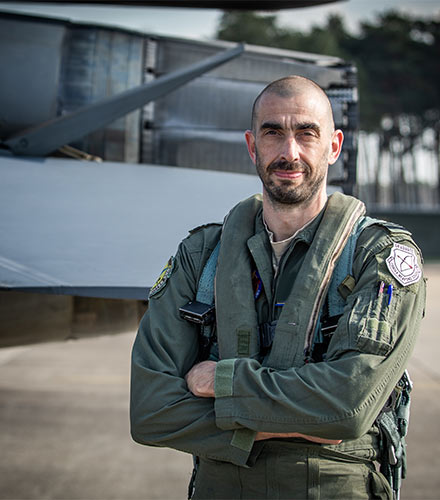