The OCU (Operational Conversion Unit) was founded on 01 September 1987 in Beauvechain (province of Walloon Brabant) with as primary task to fulfill the basic conversion off all young pilots and to ensure the tactical training of future Air Defence Pilots.

In November 1993 the OCU’s assignment was adapted due to the introduction of the Conversion Improvement Program (CIP). As a result the entire F-16 Pilot conversion of the Belgian Air Force was centralized in Beauvechain.

After the dissolution of the 1JW at Beauvechain on the 4th of March 1996, the OCU was relocated at the 10th Tactical Wing at Kleine-Brogel airbase, where it still is today although their task has been completely changed over the past few years.

A basic F-16 conversion (in the OCU) used to be an academic education, 40 hours in the flight simulator and about 100 flights. Nowadays, the conversion has been evolved together with the F-16. All of the F-16’s updates and new weapon systems are processed in the actual conversion; the Basic Qualification Training Course (BQTC). This course is comprised of 79 academic briefings (+/- 220 hours), 33 flights in the flight simulator (49,5 hours), 61 flights (82 hours), several briefings and other tasks.

Besides from the basic conversion, the OCU is also responsible for the reconversion of F-16 pilots coming back to jet aircraft after a longer absence.

To fulfill these tasks, the OCU has about five Instructor Pilots (IP’s), among a Squadron Commander and an Operations Officer (OPS). The OCU also has support of “Visitor IP’s” from other squadrons, Comopsair (COA), Aviation Safety Department (ASD),…

Over the past few years the OCU has changed a lot; location, assignment and training, even the squadron logo has had a few changes. But the main assignment stays the same; training our new pilots to young, experienced elements for one of the four operational squadrons.

As said by a former Commanding Officer (CO): “There is nothing more important than putting milk in to babies “ 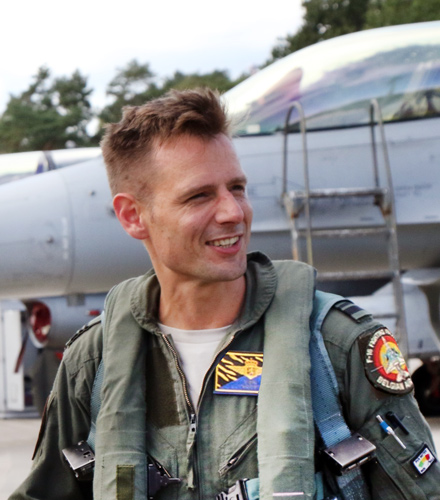